The only research going on into biodiversity on green roofs prior to 2002 was in Basel, Switzerland. Birds, Beetles and Spiders on green roofs was published in 2000 and gives details of the populations and activities of these groups on roofs. The research has lead to a change in the way roofs are laid.

They are now contoured in Basel to maximise their benefits for biodiversity, primarily invertebrates. This report is soon to be followed up by a further study, which has been undertaken to compare the biodiversity of brown land near buildings with green roofs and the roofs themselves.

This report will be published soon.

Further details of both can be obtained from Stephan Brenneisen at s.brenneisen@hswzfh.ch

A summary English translation of the first report can be obtained from upstart@dusty.fsnet.co.uk

This research project investigated the invertebrate fauna of green roofs, focusing on the spider community in order to give information about the biodiversity and conservation potential of green roofs. This study was inspired by the black redstart biodiversity action plan and was part of an Msc Conservation degree at UCL.

The study found that existing green roofs provide habitat for a diverse spider community, the 59 species collected from the study sites represents 9% of the total UK and 26% of the Greater London spider fauna. It was also found that green roofs not only provide habitat for common species but they also support Nationally Rare and Scarce and locally uncommon species as well. There were two Nationally Scarce species found in the sample namely Pardosa agrestis (Lycosidae) with Nb status and Bianor aurocinctus, (Salticidae) with Na status. None of these species have ever been recorded in the Greater London area before this study. In addition other spiders such as Steatoda phalerata (Theridiidae) were also the first recording to Greater London and Erigone alteris (Linyphiidae) was not only the first recording in Greater London but it has never been recorded in the South of England before! Surprisingly there were even wetland species found on green roofs such as Arctosa leopardus (Lycosidae) which is also first recording in the Greater London area.

The study has also investigated how the different roof design affects the species community of green roofs. While most surveyed roofs were constructed with sedum matting, as the design and environmental factors were different on each roof, the sampled roofs were dissimilar in character. It was found that there was a highly significant statistical difference between the number of spiders found on each roof. The highest number of species were found on roofs which had deeper substrate and had varied structural and vegetation diversity.

The study concluded that green roofs have great biodiversity potential. Green roofs already support a wide range of spider and invertebrate community. The presence of these invertebrates reflects the abundance of lower trophic level organisms which most likely have an impact on the higher tropic levels as food source, e.g. for vertebrates. The biodiversity of green roofs could be even more enhanced by appropriate roof design. As the study demonstrated that substrate is a vital factor explaining species assemblage on green roofs, it is suggested that substrate of the original site is either recycled or local substrate is used on roofs. By increasing structural diversity green roofs will cater for an even wider range of species.

This research was undertaken by Gyongyver Kadas.
For a copy of the full report contact g.kadas@btinternet.com

Green Roofs - a study of their benefits and barriers to their installation, in London.

This study is about Green Roofs, their benefits, the policy work that supports them and the barriers to their installation. Green roofs are prevalent in many European city's but their numbers in London are still small. Green roofs provide not only benefits to wildlife, but to the city's environment and the people who live and work in them, and while not a development panacea they non the less provide an exciting opportunity for enhancing the sustainability of both new and existing buildings.

Postal questionnaires were conducted with the major stakeholder groups in the development process; architects, developers, engineers and planners. Each group were asked if they were aware of the benefits of green roofs and what they saw as the chief constraints on their installation.

The results showed that while many people were aware of their benefits, they were not yet publicised widely enough to become mainstream. If green roofs are to become more widespread in London then there needs to be more publicity to promote their benefits. Mitigation and planning conditions on new developments should promote green roofs as an environmental gain.

This research carried out by Adam Ingleby.
For a copy of the full report contact aingleby@westminster.gov.uk 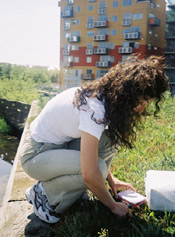 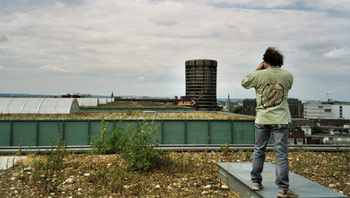